“[…] It is sad, of course, to forget.
But it is a lonely thing, to be forgotten.
To remember when no one else does.”

Now, I was actually captivated by the beginning. Adeline LaRue makes an ill-considered Faustian bargain in 1714 with a sinisterly handsome devil/darkness god – trading her soul for the life of freedom and immortality, with a caveat that hits her like a ton of bricks rather quickly – the price of freedom is forgettability. Everyone forgets her the moment she is out of sight, and she is doomed to wander the world without ever leaving a mark on it, not even a memory, until she’s so tired for it that she would beg for her life to end and her soul to be taken. Because living an invisible, immaterial life forever is a curse rather than a blessing, especially when the dark and handsome entity you made that bargain with seems *very* interested in you and your misery.

And then one day, three centuries later Addie meets a man (or a boy, as she insists of thinking of him despite him pushing thirty) who remembers her despite her curse. And there may be a good reason for that.

Sounds good, right? And for a bit it was. I kinda loved it for about a 100 pages or so.

“I gave you what you asked for, Adeline. Time, without constraint. Life without restriction.”
“You cursed me to be forgotten.”
“You asked for freedom. There is no greater freedom than that. You can move through the world unhindered. Untethered. Unbound.”

And then my brain started getting peskily restless, and started asking all kinds of questions and pointing out all kinds of annoyances.

– Why is Addie unable to say any variation of her name – until she suddenly can to Henry?

– How is Addie unable to leave her mark on the world (can’t even set an abandoned hut on fire) until she is able to transplant a tree sapling that grows into a full-size tree?

– So if everyone immediately forgets her the moment she’s out of sight, have none of her lovers ever needed a bathroom break in the course of the evenings they spent with her? Either she accompanied them to the toilet or else there was quite a bit of full-bladder lovemaking.

– Was there a point to the constant mentioning of her seven freckles (apparently shaped like a constellation) besides making her recognizable in the works of art? Because they are mentioned quite a bit, without much payoff. And everyone is mesmerized by them for some reason. Seven freckles. Over and over again. Freckles do not replace personality.

– Is there a reason Henry looks so much like Luc/ Adeline’s love fantasy from before her curse? Wouldn’t it be more interesting (especially given the nature of his curse and the nature of his relationship with Addie) for him to be unremarkable-looking, plain, ordinary?

– How the hell is Henry able to afford his own apartment in New York without roommates on what is likely to be minimum wage even before the deal that makes him irresistible to others? Plus him being able to afford a diamond ring on what I presume are measly paycheck leftovers from New York rent? What odd magic is at work here? Or are his parents still paying for him, therefore providing a decent reason for why people are not too impressed with him?

– Why do we not get to actually see the progression of much more interesting relationship between Addie and Luc?

– Why did it take a whole decade for Addie to become a fluent reader? I mean, seriously?

– And what exactly is so inspirational about Addie for her to impress all those artists and writers? There must be something, but we are not actually shown any of that. It can’t be just these FRECKLES, right?

– And why is Addie more interesting to the darkness/old god/Luc than, for instance, Beethoven or Shakespeare or Sinatra? Is that because of those freckles? They must be there for a reason, right?

– And does Schwab have a thing for curls or what?

– And don’t even get me started on insta-love that happens because plot needs it to, but with no chemistry between the leads whatsoever. 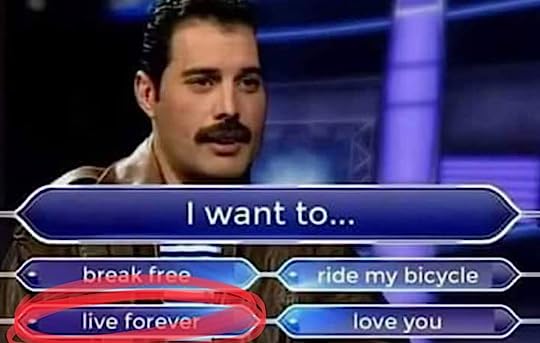 “Henry is an impossible thing, her strange and beautiful oasis. But he is also human, and humans have friends, have families, have a thousand strands tying them to other people. Unlike her, he has never been untethered, never existed in a void.”

This book retains a very young feel to it, despite Addie being 300+ years old. She never seems to progress beyond her physical age of 23 despite centuries of experience, her thinking never seems to change, and her personality never develops. It’s just so young. And everything feels sweet and safe and twee, even when she is supposed to be in danger. Other than her selling her body in the beginning of her story, it seems that Luc is there to rescue her out of genuinely sticky situations, and New York is a shiny sparkly wide-eyed sanitized world of art and secret lively art and music venues and Pac-Man “speakeasies” and rooftop parties and never ever shows any genuinely unpleasant side. And deals with the gods who answer after dark are immutable and final and unchangeable – unless Addie needs them not to be. And adults being constantly referred to as boys and girls instead of men and women, adding to the very young adult feel in a book that really should not be young adult.

For a book that is so long, it manages to leave the characters quite underdeveloped. Half of it consists of flashbacks to Addie’s 300 years of existence, but after a few they all assume the familiar repetitive feel – which may fit Addie’s repetitive “invisible” life but does not add that much to the story. In the meantime, there are tantalizing references to interesting things happening – French Revolution, World War II, transatlantic voyage – but all we get to see are mundane snippets with questionable love story, most of the development of which is just hinted at and then barely shown in the very end. “Show not tell” does not really happen much here.

And of course, everything is filled with angst. Oh, the angsty angst.

Yet I did not hate it. It was an easy read, done in competent, although at times much too flowery writing. The strength of the beginning carried me through at least half of it easily, so there’s that. It’s not bad; it’s just nothing as special as one would expect from all the buildup.